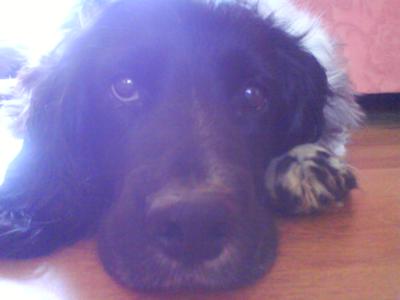 We rescued Toby when he was about 4 years old, he had previously been abused and we saw that we took good care of him!

Our previous dog was a German Shepherd and was quite a calm dog so when we got Toby, a Springer Spaniel, I was quite scared and nervous about him at first, as he was so bouncy in comparison! I soon got used to him and he became my best friend. I sneaked him food under the table and made sure that I cleaned up any accidents in the house before my parents found out so he didn't get in trouble! I love him so much!

Now he is around 11/12 years old and 6 months ago he wasn't breathing right and coughing a lot. Eventually we took him to the vets. I was so scared when he went, I thought he wasn't going to make it through the day, but sure enough, he got medication and he's been good for 6 months until Boxing Day... I came home from work and he had got himself so excited that he was wheezing all day. I really didn't think he would make it through the night, but sure enough in the morning he was bouncing around back to normal waiting for his breakfast!

He's been doing well since then, but I'm starting to get a bit scared now. He's my best friend and I can't even play with him properly now because he gets too excited or isn't interested. All I can do is sit and cuddle him. I'm scared about how it's going to happen and when and what if I'm the one that finds him. It's awful, but I'm trying to enjoy what I have with my gorgeous furry best friend and enjoy the time I have left with him! I love you Toby :)