Shadow-bug - Gone but not forgotten 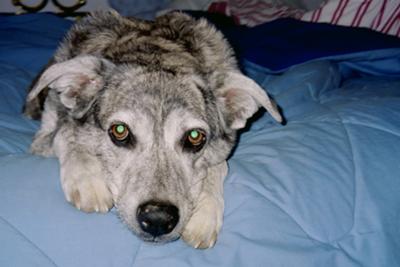 I had Shadow since she was 10 1/2 weeks old. Adopted her from a rescue organization that took her and her siblings out of an abusive situation. I remember going into the outdoor pen and all these cute little bundles of fur rushed over to me. They were black and brown puppies - and then there was her...she was a color pattern I had never seen before (brindle I would later learn) and she pushed her way past all of the other dogs to get to me and landed in my lap. I was pretty set on a female only and she was the only one in the pack. I took her out of the pen and immediately she rolled onto her back and let me pet her belly. The foster mom said "That's a good sign" and I knew too, that she had chosen me. She slept by my side on the truck ride home. She was a Queensland Heeler/Australian Shepherd mix and true to her breed. She wasn't "clingy" - but she did always have to know exactly where I was and wouldn't tolerate even a fence or tree standing between us - she had to know she could get to me. We had many, many happy days, months and years together. She had food allergies and so for many years I baked special treats for her every week - which she thought was pretty great as she got to do taste tests and lick the bowl. She often hogged the entire king sized bed - although how she managed at just 50 pounds is beyond me. Many nights I had a small section to curl up in while she sprawled out, snoring and completely at rest.

She was always surprising me and made me laugh many times. When she was a puppy - she was pretty destructive due to boredom (chewed through the drywall, carpet, destroyed a couple of mattresses and chewed on the outside of the house) - but I wouldn't have traded her for the world. Before I wised up and had a dog door installed - she would poop behind the curtains. She loved her little baby pool and loved to play kickball with a deflated basketball. She gutted more stuffed animals than I could count and loved nothing more than to find a really thick stick - more like a log - to chew on. As she grew older, the sticks became twigs. I remember one time we had this weird phenomenom where a bunch of grasshoppers were just everywhere in parking lots, in the streets, etc. Well, I happened to have a small opening in the roof of my porch and about 20 or so of the critters got into the porch. I am pretty terrified of insects of any kind and I screamed and that's when Shadow went into action. She started removing them from the porch - took them through her dog door to the outside, bit off the grasshopper's head and repeated this until they were all eradicated. It didn't take very long - but I just stood there completely surprised and really really happy that she did that. (Sort of felt a little sorry for the grasshoppers.) One time someone even broke into my house while I was away at work. When I pulled up to the house - the front door was wide open and it was dark and quiet - the burglars had tripped the circuit breaker. Instead of running away - she had actually gone outside into the back yard - waiting for me to return home. I was so glad to see her and she me.

Just this past November - she was diagnosed with squamous cell cancer of the soft palate and left tonsil. I was devastated. The tumor was large, invasive and growing rapidly. A few days ago I had to have her euthanized. The tumor was growing more and restricting her airway more and more to the point where she was gasping for breath at night. I didnt want to her die that way - gasping for air, so I did the most humane thing and had her put down. It was a difficult decision. She was 14 - but despite the cancer - was still interested in me and food, although she had slowed down considerably. I miss her a whole lot - but know she is better off now. It is strange not having her around - there were so many little things we did together. She would even come over to have her teeth brushed as I brushed mine. She had a pretty great life with me and she made my life better by being in it.