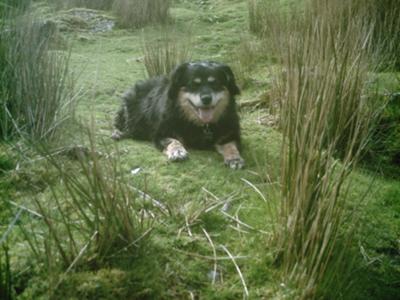 This is Megan, a 13 year old Border Collie crossed with King Charles Spaniel.

I thought I'd lost her a couple of months ago. She had already suffered a couple of mild strokes, which she recovered well from, but went on to suffer a devastating one. She couldn't stand for two days, and I had to give her water via a syringe and hand feed her. Everybody advised me to say goodbye, and I admit I didn't hold out much hope that she'd ever be the same dog again, even if she did regain some mobility.

I knew she wasn't finished, but I would have been happy if she had just regained enough mobility for a basic quality of life. Within a week, she was back on her feet in a small way. She could stand (with some help) and stagger outside to do her business. She's a brave, tough little soul, and she wasn't going to be beaten. Within two weeks, she was standing by herself and could go on short walks.

2 months later, and the recovery she has made is almost unbelievable. She now runs around, chases balls and other dogs, jumps in and out of the car etc, in a way she hasn't done since she was about 8. It's as if God has wound the clock back on her age. Before the big stroke, people would often comment that she's an oldie, now people are surprised when I say she's 13.

Hopefully, Megan still has many years of fun ahead of her. I cherish every day now, and shudder when I think of how many dog owners would have said goodbye when she was immobile for several days.

If your dog has a stroke like that, remember Megan, and give him/her every chance. You might be amazed how much life they still have inside of them.